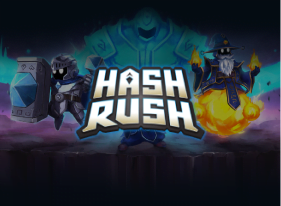 Hash Rush is an online fantasy game where players can build mines, fight monsters and trade resources in the fictional Hermeian galaxy.

Hash Rush is one of the first blockchain-based games launched before the craze in the P2E market. It is a player-friendly, exciting game featuring a story of settlers’ adventures in the fictional Hermeian galaxy. Gamers need to face numerous challenges on the land destroyed by a Crystal Storm, fighting alien creatures, building settlements, and contending for Crypto Crystals.

The 4IRE team of developers and blockchain engineers took an active part in Hash Rush development. The company did not create the game itself but held responsibility for the blockchain tokenization and NFT development.

4IRE created the RUSH token for the in-game transactions and status upgrades. The token was developed based on the Ethereum blockchain’s functionality. It could be either earned with in-game activities or acquired at the crypto exchanges for one’s in-game rating enhancement. The movement of RUSH coins from and to the game is user-friendly, requiring only some basic knowledge of crypto wallet functioning.

The in-game NFTs of value are Crypto Crystals. They are introduced in the gameplay as tokenized blockchain rewards that the gamers can discover or earn. The Crystals can be traded at the NFT marketplace or used to unlock new status privileges or game levels. Possession of Crystals gives a gamer a feasible competitive advantage and boosts their crypto mining potential.

The 4IRE team equipped the Hash Rush game with NFT-like functionality by creating the RUSH token and Crypto Crystal assets for in-game rewards and transactions. This way, Hash Rush became one of the pioneering offers in the P2E market, combining the fascinating gameplay with lucrative crypto mining opportunities.

Our team is pleased to announce that DAO Maker is an official strategic partner of 4ire Labs! Learn more details about our future collaboration and why DAO Maker chose us as their long-term partner.
29 Mar, 2021
Blockchain

What Are Hybrid Contracts and Their Role in Building Web 3.0?

Today developers still encounter some issues when writing smart contracts in ink!. In this article, we describe how to avoid them and suggest potential solutions.
22 Jul, 2021
Learn more