HomeInsightsCardano vs. Polkadot: Which ‘Ethereum Killer’ to Look Into?

Cardano vs. Polkadot: Which ‘Ethereum Killer’ to Look Into?

Blockchain has revolutionized the tech world by offering an immense number of new possibilities and decentralization features. Thus, myriads of new individuals and businesses join the DeFi sector every day to embrace the potential of blockchain development.

The Ethereum blockchain became the first ecosystem to offer flexible functionality for the creation of numerous Fintech solutions. Thousands of blockchain projects have actively exploited it since 2015. Yet, as of 2021, the Ethereum network has grown incapable of handling the immense workload that the support of currently functioning and upcoming blockchain projects create. Thus, it’s time for alternative blockchain platforms to gain momentum, offering features similar to Ethereum and helping relieve the burden to improve blockchain performance.

Some of the promising alternatives to Ethereum offering similar functionality and improved throughput are Cardano and Polkadot. Both have enjoyed steadily rising popularity among crypto enthusiasts and developers of all scales. Still, the question of choosing Cardano vs. Polkadot remains topical for many businesses planning dApp development. Besides, it’s still unclear which of the two can really substitute Ethereum in its wholeness. To help you out with the decision and inform you about Cardano and Polkadot functionality for upcoming blockchain product development, 4IRE experts have compiled an in-depth guide comparing these three protocols.

Cardano is an innovative, third-generation blockchain that has boomed throughout 2021 and has witnessed a 1400%+ increase in its capitalization since the start of the year. Why has it grown so popular, and what can we expect from it in the coming years? Let’s start with a quick introduction to Cardano and the technology behind it.

So, what is Cardano? It’s a public, open-source, and fully decentralized blockchain platform created in 2015 by one of the founding fathers of Ethereum, Charles Hoskinson. The term “third-generation” refers to the infrastructure of its functioning and the mechanics of transactions within the ecosystem. The first-generation blockchain is BTC; it has become a powerful source for promoting blockchain, but its transactions were limited and could not serve the contractual requirements of the transacting parties. The second-generation blockchain was Ethereum; its revolutionary innovation was the design of smart contracts, based on which users started to transact safely and automatically within the blockchain universes.

Cardano evolved as a solution to the major bottlenecks that both first- and second-generation blockchains experience. Its engineers found mathematical solutions to blockchain security vulnerabilities and separated the accounting and computational layers to enhance the blockchain’s productivity. Besides, it offered an infinitely scalable consensus mechanism unattainable in BTC and ETH systems. 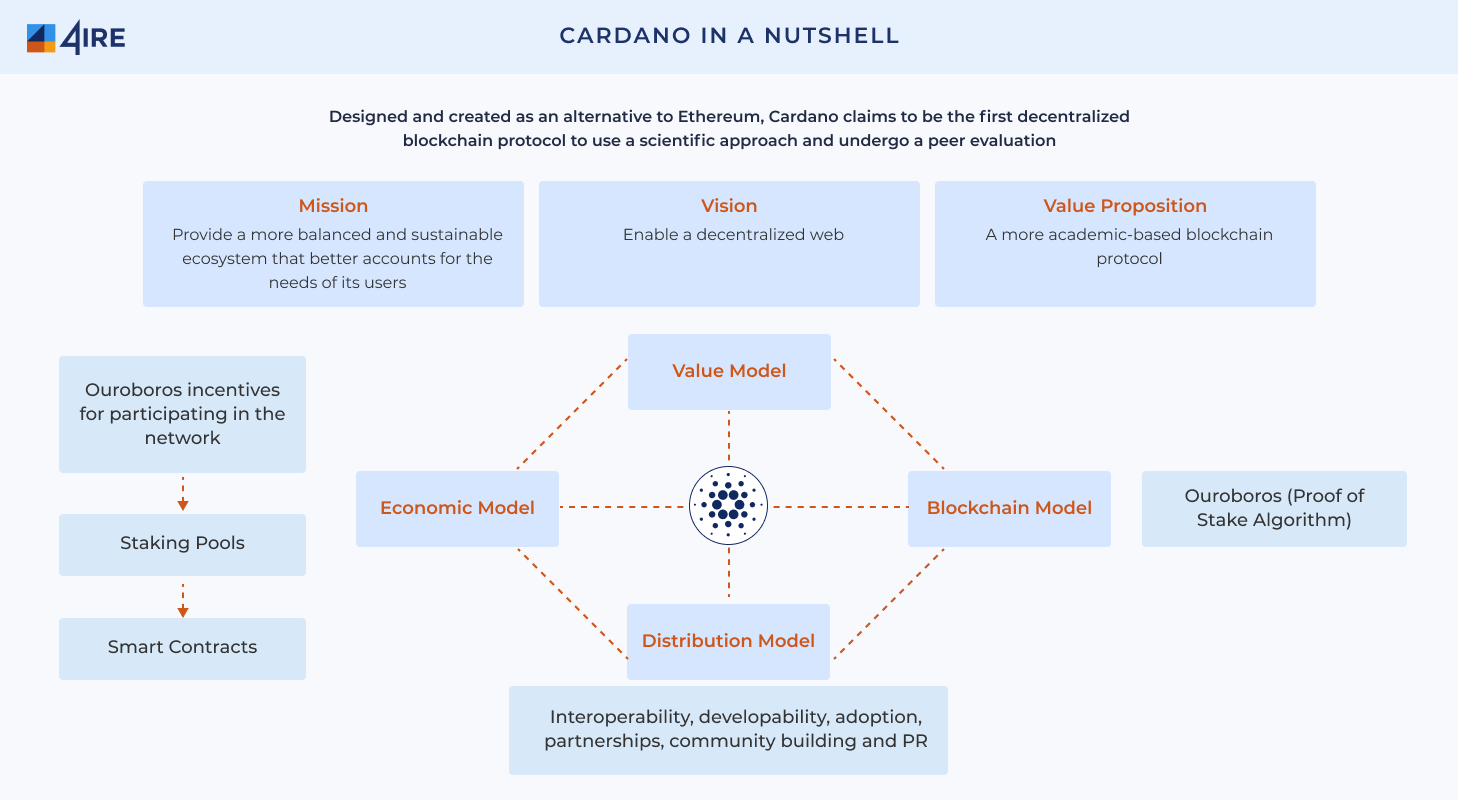 Why is Cardano good? First, it uses the proof of stake (POS) consensus protocol, which is a greener alternative to a more common proof of work (POW) protocol used in Ethereum and Bitcoin blockchains. This principle makes it much more energy-efficient compared to other blockchains. Second, Cardano is a two-layer blockchain, with the settlement layer overseeing transactions with the help of its native coin ADA and the computation layer enabling smart contracts and Cardano-based DeFi app operation. The computation layer is built identically to that of Ethereum, thus making Cardano a viable alternative to the overused and overburdened ETH ecosystem. Third, its 2021 update enabled smart contracts and dApp development on its basis, thus expanding the spheres of Cardano application. Finally, the use of the Plutus language for smart contract engineering and the Marlow smart contract language for non-programmers makes the protocol highly user-friendly and universally applicable for various business and technical needs.

Now let’s clarify, what Is Polkadot? Why does it also compete for the title of an Ethereum killer, and can it really transform the long-standing blockchain development tradition entirely?

Clients seeking Fintech solutions often resort to Polkadot as the underlying blockchain solution today because of the innovative approach to the network infrastructure it offers. The Polkadot ecosystem’s design presupposes one relay chain, which is the hub ensuring the flawless interoperability and advanced safety of all linked blockchain products, and an endless number of parachains – separate blockchain apps, exchanges, and services created on Polkadot and linked to the relay chain via slots. As a result of such architectural solutions, Polkadot ensures hassle-free launch, operation, and update of existing Polkadot projects without one project’s activities overloading or disrupting the performance of others. 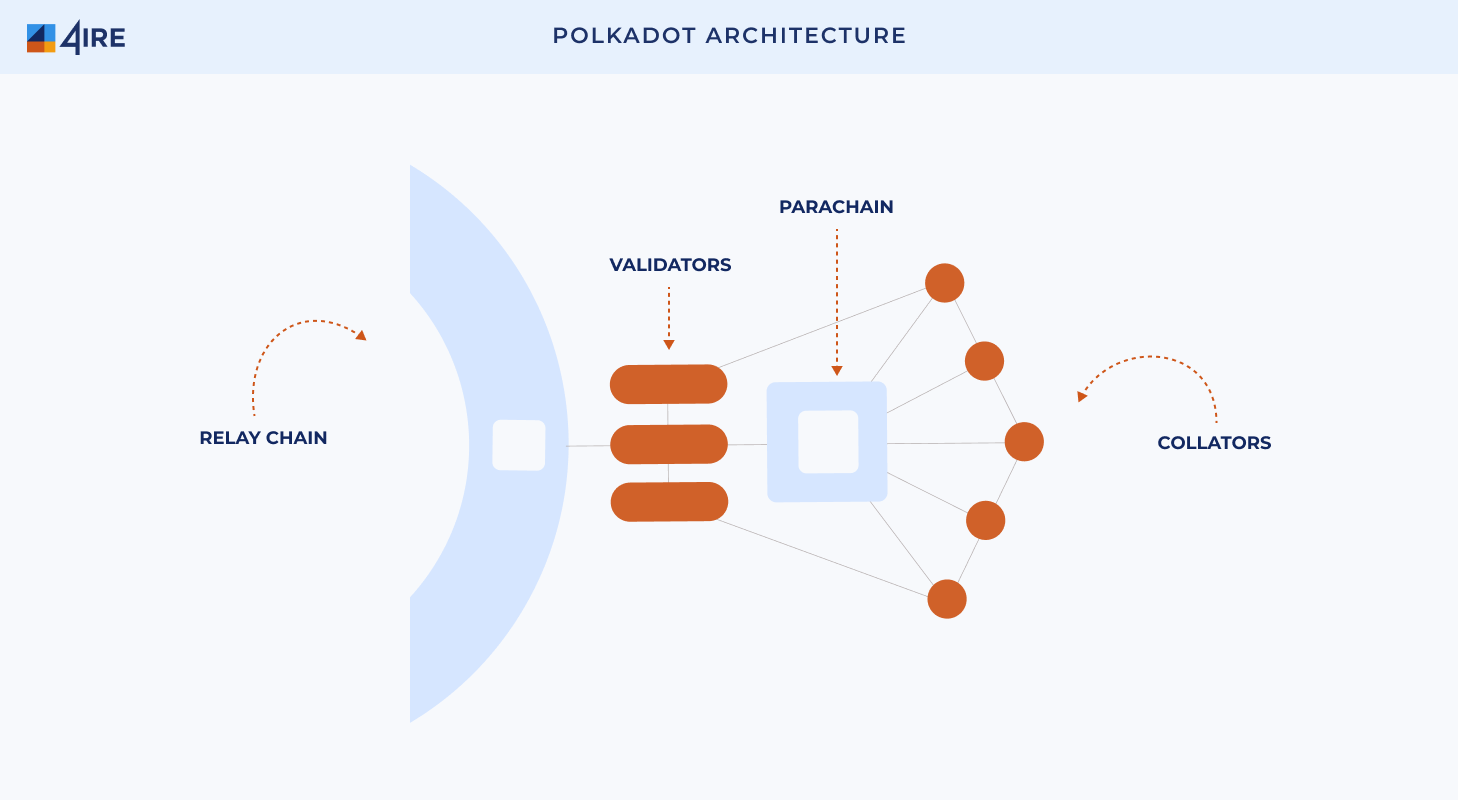 Based on these features, Polkadot is a strong competitor for the title of the most robust platform in the blockchain sector, with advanced security and scalability solutions exceeding those of older blockchains. The Polkadot Relay Chain was launched in May 2020, and a launch of several essential parachains is expected in 2021.

Why Polkadot Is Better than Cardano

Overall, given that two former rivals from the Ethereum team – Charles Hoskison and Gavin Wood – created Polkadot and Cardano, they are both targeted to solve the bottlenecks of Ethereum, though in completely different ways. Wood wanted to focus on development and research, while Hoskison wanted to transform Ethereum into a for-profit organization and monetize the innovative technology. However, some features still point at Polkadot’s technical superiority over Cardano.

Still, it’s impossible to say that Polkadot is an indisputable winner in this comparison. Its coin DOT suffers from 10% inflation every year, which means that its holders have no other way to preserve their assets other than staking them in the network (with an APY of 10-15%, the benefit approximates zero). Besides, Cardano’s operations are more sustainable and resilient in the long run in terms of functions and technical infrastructure. So, it has all chances to become an all-in-one blockchain solution connecting to or encompassing the rest of the options in the blockchain world.

Difference between Polkadot and Cardano

A couple more words on the Cardano Polkadot difference.

These distinctions should be kept in mind when making the Polkadot v. Cardano choice as Cardano and Polkadot pursue different strategies in the long run.

Polkadot vs. Cardano vs. Ethereum

As both Cardano and Polkadot were created by the masterminds behind Ethereum and aim to resolve the limitations of this blockchain, it’s natural to compare them both to Ethereum in terms of functionality and features. Here is the detailed breakdown of their distinctions and similarities for expert evaluation. 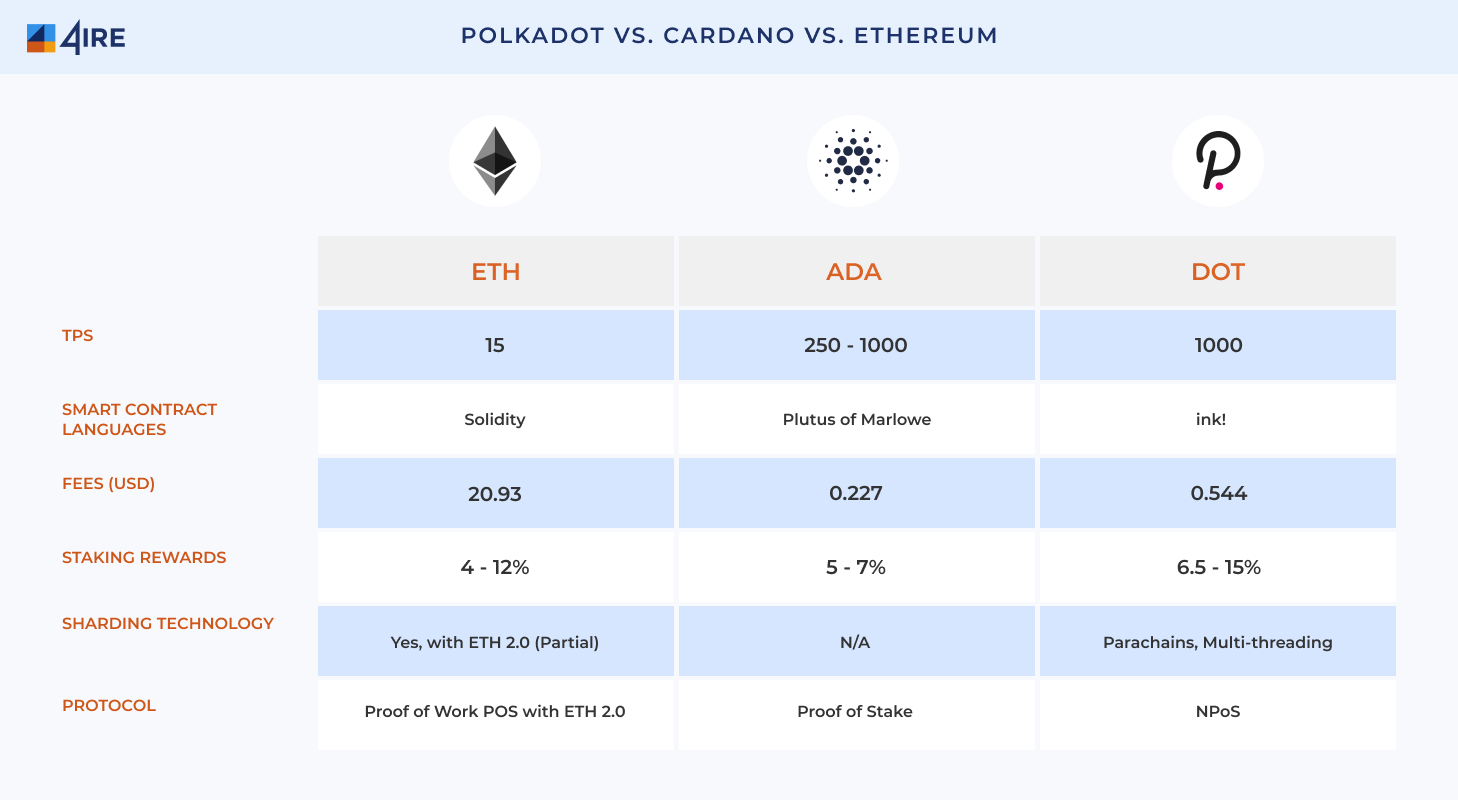 The projects’ mission is identical – both Ethereum and Polkadot serve to allow dApp development on their platforms. Ethereum’s primary tool for this task’s execution is a smart contract, while Polkadot is primarily focused on helping people build entire blockchains and integrate them into the Polkadot mainnet afterward. In this way, the load on the functioning Polkadot project  relay chain is significantly reduced, enabling it to guarantee robust functionality and impressive security. All blockchains developed on Polkadot can go through the preparatory environment, Kusama, where they test their project’s work in real-life conditions to eradicate all problems and launch a well-functioning project.

The same can be said about Cardano and Ethereum; their common goal is to help users build new tools and protocols. However, Cardano is more beneficial than Ethereum in terms of its immediate scalability and advanced security features Ethereum will hardly ever attain. Cardano functions based on a quicker and more eco-friendly POW consensus principle and offers two architectural levels instead of Ethereum’s one-layer design. The POW protocol allows Cardano to process over 250 transactions per second compared to 10-30 transactions that Ethereum handles. This feature also enables much lower transaction fees for Cardano users. 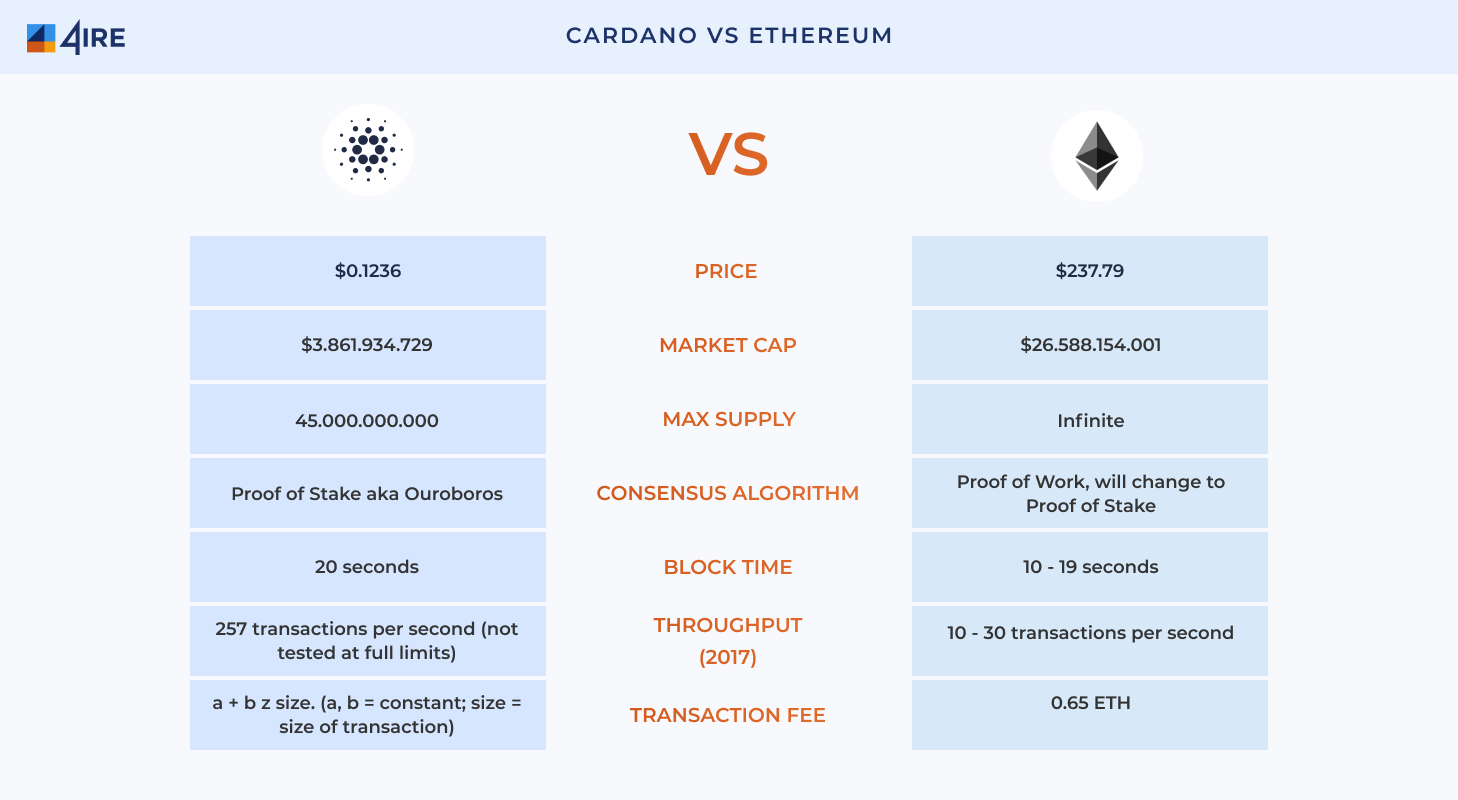 Is Cardano the Next Ethereum?

Overall, the chances of a quick transition from widespread Ethereum use to Cardano adoption are low. With thousands of blockchain engineers knowing the functionality and power of Ethereum, they’re likely to experiment with new solutions less eagerly. Still, Cardano has some competitive advantages that can secure a strong position for this blockchain in the development market in the coming years – its environmentally sustainable blockchain protocol Ouroboros solves the throughput, high gas fee, and electricity consumption issues that Ethereum currently experiences.

At its basics, Cardano is the equivalent of Ethereum 2.0. While the Ethereum engineers still need to integrate the changes that the 2.0 update involved, with many problematic issues arising underway, Cardano already has it all. Thus, while Ethereum is dramatically non-scalable and suffers considerable challenges related to the increasing load, Cardano can make blockchain work in a fundamentally different way powered by the two-layer architecture.

Is Polkadot or Cardano better?

Both blockchain options are good enough to use as third-generation blockchain solutions. Cardano blockchain is better in terms of infrastructure, offering a two-layer design, while Polkadot provides developer-friendly ecosystem design and development opportunities. Still, both of them are too new to say much about their sustainability and increased demand tolerance.

What are the main criteria in the Cardano Polkadot comparison?

As a rule, Cardano and Polkadot are compared based on their mission and the underlying philosophy, technical architecture, blockchain specifications, and the community following. Experts also compare their ecosystems and evaluate the tokenomics behind both (i.e., what coins enjoy higher popularity, give users better APY terms, and suffer from lower inflation rates). You should also take into account the ease of blockchain product development on each of the platforms.

What makes Cardano and Polkadot better than Ethereum?

At present, both Cardano and Polkadot boast better throughput and lower fees than Ethereum offers. They include some innovative features that Ethereum lacks and are more energy-efficient products because of the POS protocol used instead of the traditional POW approach.

Which one is the next Ethereum?

It is hard to say whether any of the blockchains can substitute Ethereum as this blockchain has been enjoying years of widespread adoption. Besides, the Ethereum 2.0 upgrade conducted in the summer of 2021 actually aimed to resolve the problems that both Cardano and Polkadot target. Thus, to take the place of Ethereum, both of these blockchains need to pass an increased demand test and prove their sustainability to attract a more significant following.

Are Blockchain, AI, and IoT a perfect fit? Check our guide on maximizing the value of these innovative technologies ...
07 Apr, 2021
Fintech 11 min

With the total number of assets in green bonds and an expectation of market growth Green Finance has attracted many ...
28 Oct, 2022
Fintech 11 min

FinTech Innovation: How It Is Making Payments More Efficient

The payment sector is experiencing large-scale, far-reaching innovation today. Learn more about how digital innovati ...
17 May, 2021