Blockchain technology is spreading like fire across industries and businesses. It is currently used in digital voting, medical recordkeeping, decentralized finance, gaming, capital markets, supply chain management, etc. More and more businesses and individual users want to take advantage of blockchain to increase transparency, security, and communication. With so many potential applications of this sophisticated technology, the demand for blockchain development language skills and knowledge has been increasing. This article provides some background knowledge about blockchain programming languages, which can be helpful to both developers and businesses seeking to incorporate blockchain into their work. 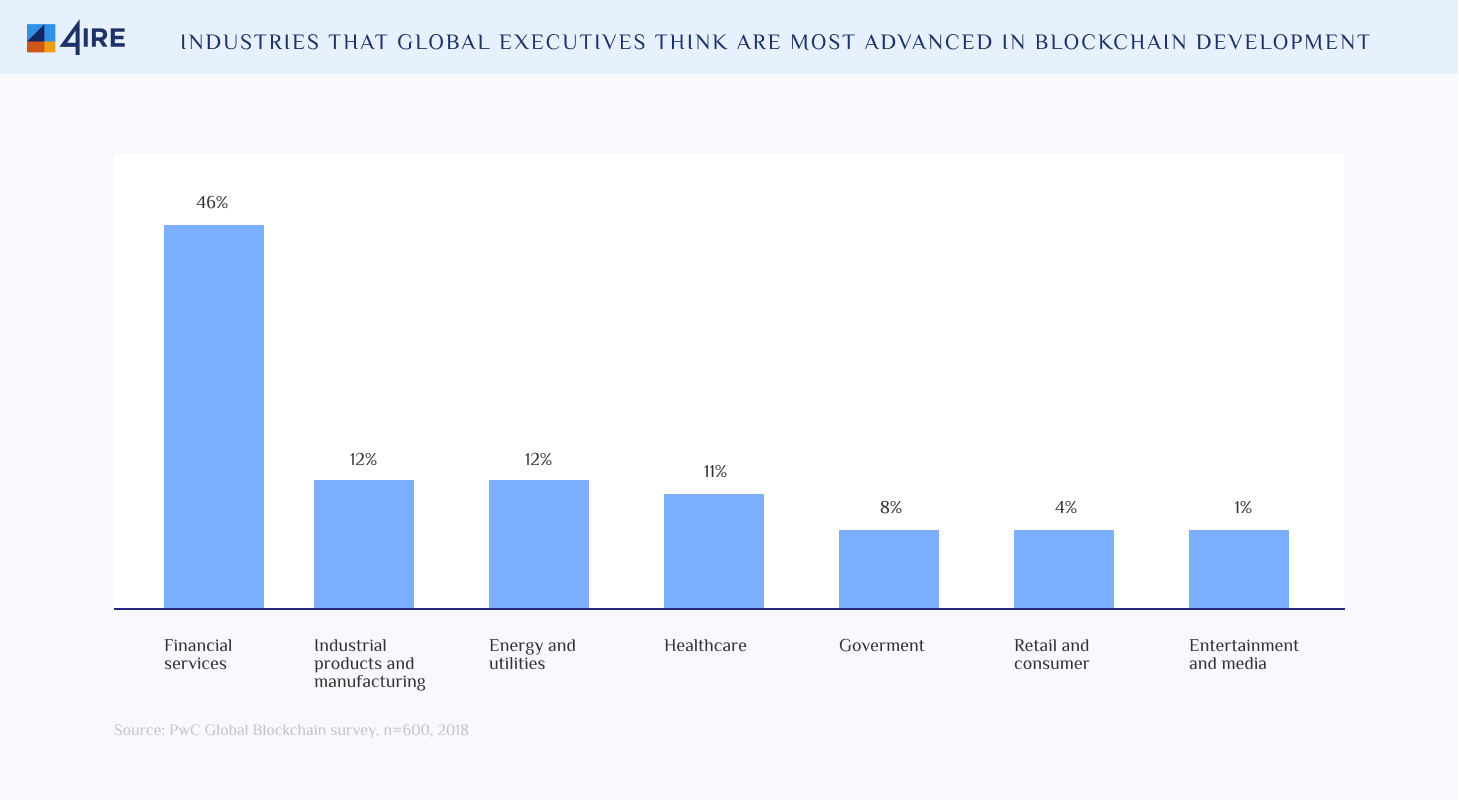 Blockchain is a complex system of nodes initially designed to store financial data but technically able to hold everything of value. It is an open, decentralized system that allows recording transactions between parties and across multiple devices. Its main advantages include transparency, security, and reliability, as it’s technically impossible to alter the data in the blocks without other users noticing it.

If you are confused, don’t worry. Here’s an example of Bitcoin transactions that will help you understand this technology better. When a user purchases a Bitcoin, the system creates a block representing this transaction and containing information about the time, date, and amount of money. The block is then sent to every node in the blockchain so that all users can see it. After the nodes validate the transaction, it is complete and reflected across all devices. In this way, the transaction becomes an inseparable part of the existing blockchain and ensures the user’s ownership of the Bitcoin. It is essential to understand that the blockchain is not limited to cryptocurrencies and can be used to track anything. 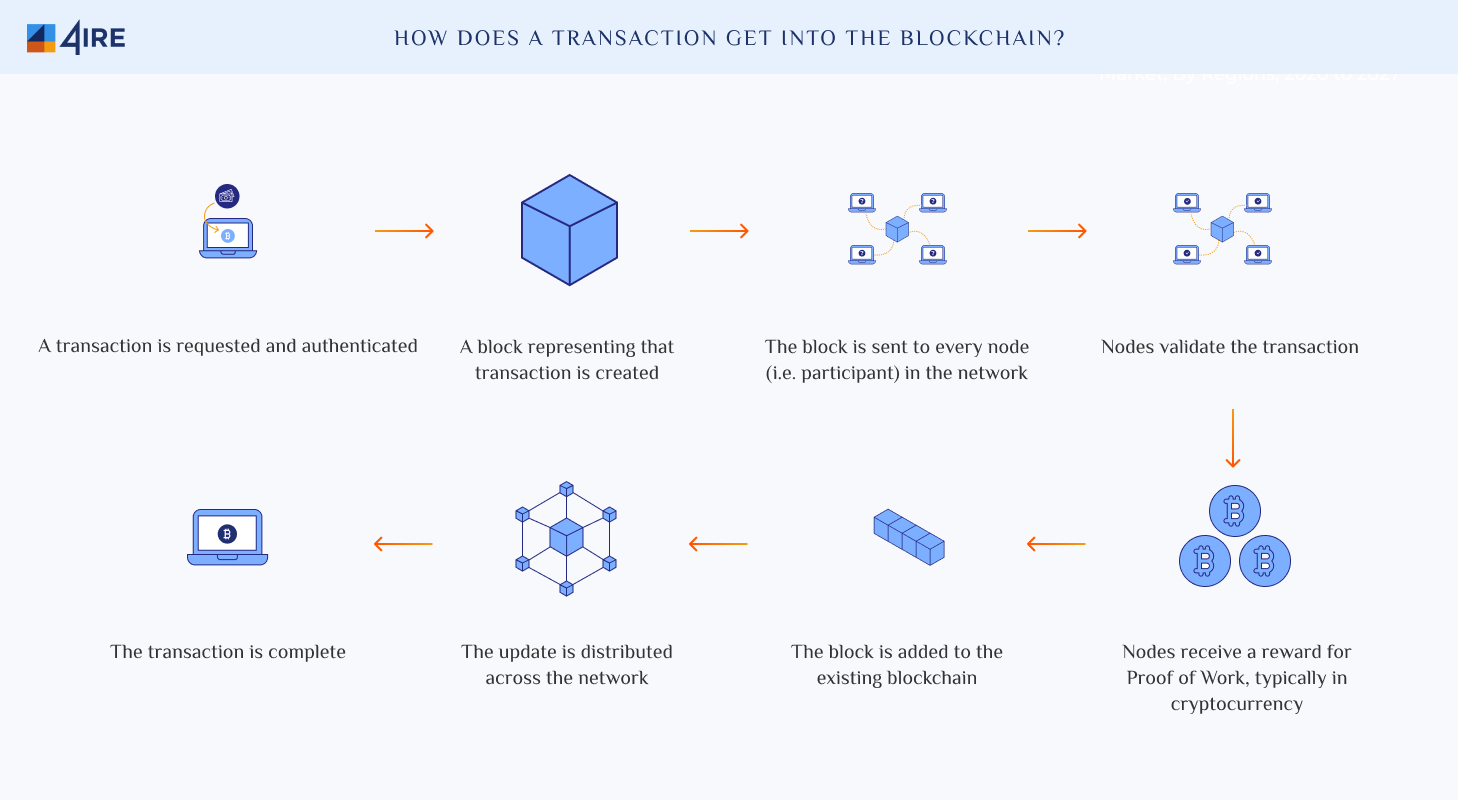 The nature of blockchain technology makes it extremely attractive for different industries, businesses, and individual users. It offers a secure and permanent record of all transactions and ensures an unprecedented level of data ownership. It helps reduce the risks of fraud and security breaches in the financial industry and enable effective monitoring and auditing. It is also associated with increased trust, cost-effectiveness, speed, and immutability, which explains the growing popularity of blockchain development services. 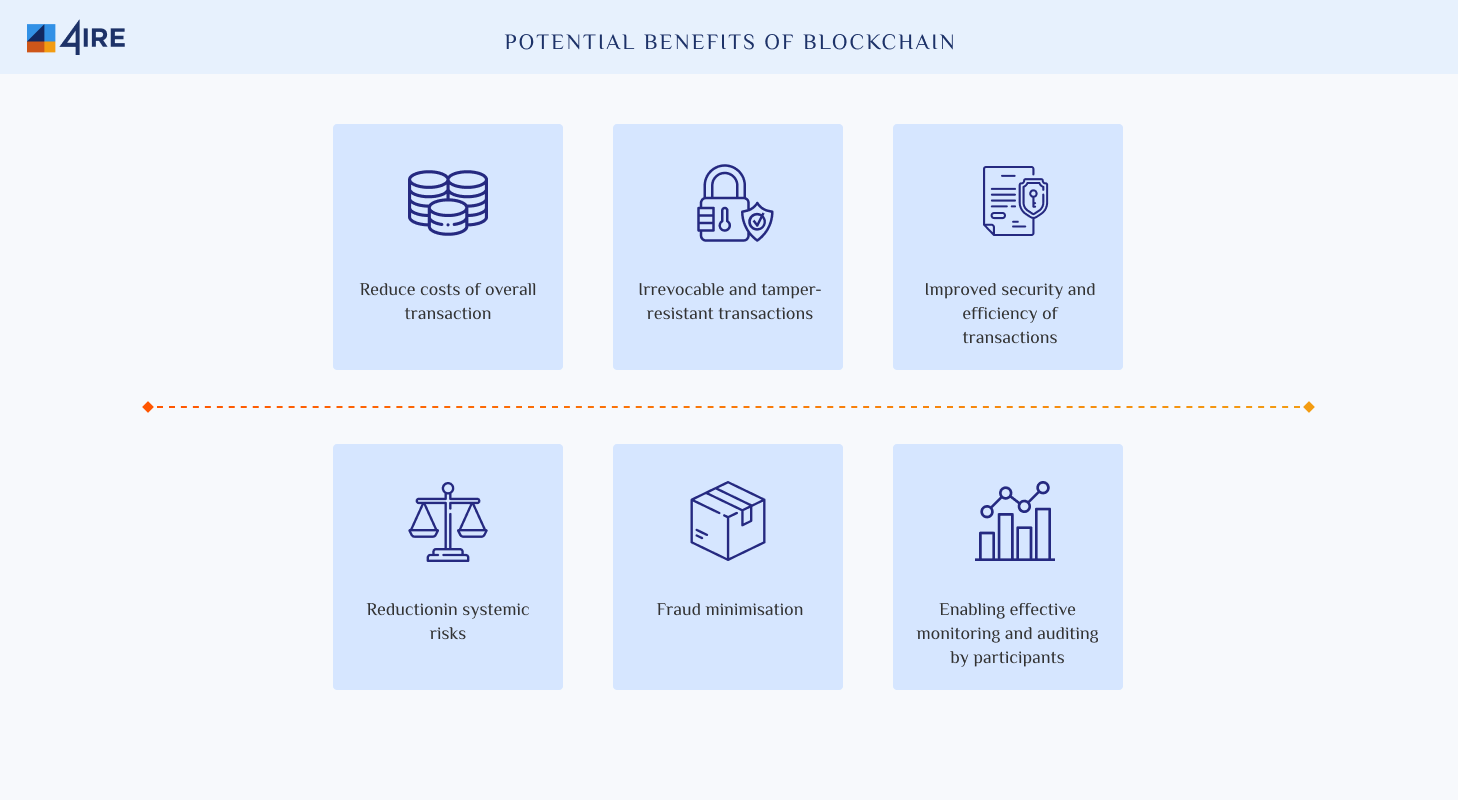 Current and potential applications of blockchain technology are endless because every industry has some information that people want to exchange securely. The following list contains the examples of the spheres in which blockchain has been widely used:

For instance, in the supply chain, blockchain’s unprecedented degree of connectivity helps manage and track millions of products and shipping containers across the globe. Given the fast development of trade, blockchain is extremely valuable for facilitating data transfer among suppliers, manufacturers, shippers, logistic companies, customers, and other stakeholders. Thus, no matter what interests you have or what business goals you pursue, knowledge of programming languages required for blockchain is crucial for designing efficient blockchain-based systems.

Created for designing smart contracts, this programming language has been earning increasing attention recently. It was built by the creators of Ethereum – one of the most popular technologies facilitating online payments with cryptocurrency. Therefore, Solidity is specifically adjusted to align with the Ethereum blockchain. The main benefit of this programming language is that it is similar to JavaScript, ECMA-262, Powershell, and C++, which makes it easy for developers to master it. The developer-friendliness is accompanied by flexible language and straightforward instructions, making Solidity an appropriate solution for blockchain development. Other advantages of this language include the following:

However, some may perceive Solidity as less applicable compared to other programming languages such as JavaScript. The problem is that Solidity is used for building blockchain only, while JavaScript is universal and can also be applied in other spheres. Nevertheless, this limitation does not prevent thousands of developers from using this blockchain technology programming language. 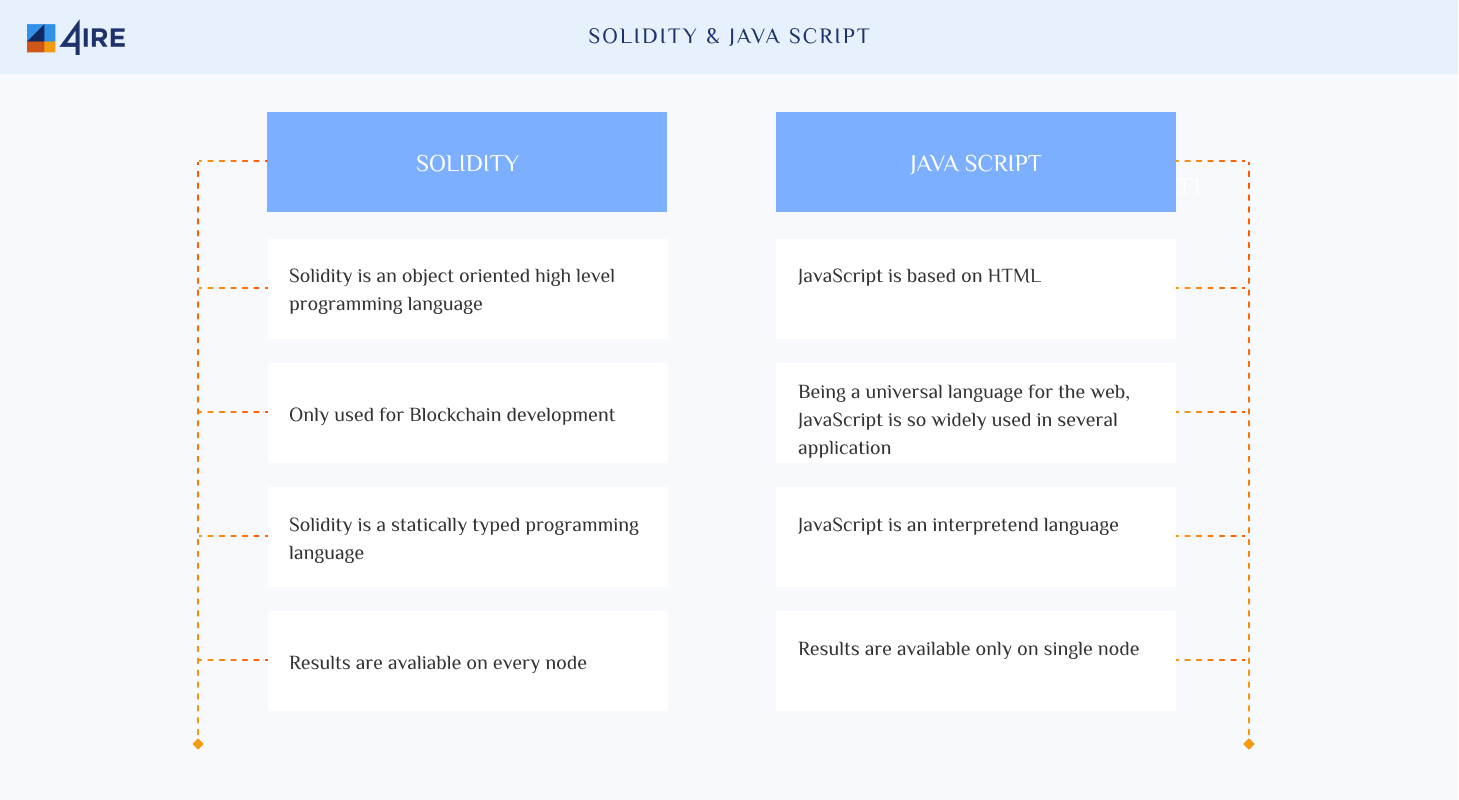 This programming language is one of the oldest and most widely used ones. It has had an immense effect on the software industry for the past decade. This medium-complexity programming language is efficient and universal, which explains why many system drivers, operating systems, browsers, etc., use it as their primary language. The following features make C++ suitable for blockchain development:

C++ is a preferred tool for blockchain development because it boasts high speed and object-oriented characteristics and has multiple platforms. Other features making C++ stand out include high computational performance, transparency, customization, and the use of the Standard Template Library (STL). These features simplify blockchain creation, allowing developers to connect data and functions in modules, just like blockchain uses cryptographic chains to connect the blocks. The fact that most outstanding blockchain platforms such as Ripple, EOS, Stellar, Monero, and Blockchain all use C++ demonstrates its efficiency and reliability.

There are some drawbacks of C++ that should be mentioned:

However, these limitations are minor and do not outweigh all the advantages of this programming language. This newbie is less famous than Simplicity or C++, but it has been widely applied to build secure, innovative, and immutable blockchain solutions. Its most notable advantages for developers include the following:

Developers having skills in C++ use find it easy to learn Rust because these programming languages have similar syntax. However, this similarity may also become a challenge if developers fail to recognize the unique characteristics of Rust.

Go, also referred to as Golang, is another programming language used to create blockchain systems. It is similar to C in synthesis, but it also has garbage collection, memory safety, and structural typing features. Let’s list some of the most notable features and advantages of this language:

The Go community currently includes more than 800,000 developers, which means that one can always get technical support and guidance online.

According to the TIOBE Index and PYPL Index, Python is considered the best programming language for blockchain, along with several other languages mentioned in this article. Its open-source support means that anyone can take advantage of multiple tools, libraries, and frameworks, thus reducing development time. Python is very easy to learn, which makes it a common entry point into the blockchain development sphere. Its universal nature allows using it for network servers, desktop apps, machine learning, and, more importantly, blockchain. The following advantages make Python a preferred choice for many blockchain developers working on diverse projects, from financial software development to gaming:

Python is used in Neo, Ethereum, and smart contracts for Hyperledger, and its simplicity and efficiency will likely expand its application further in the nearest future. 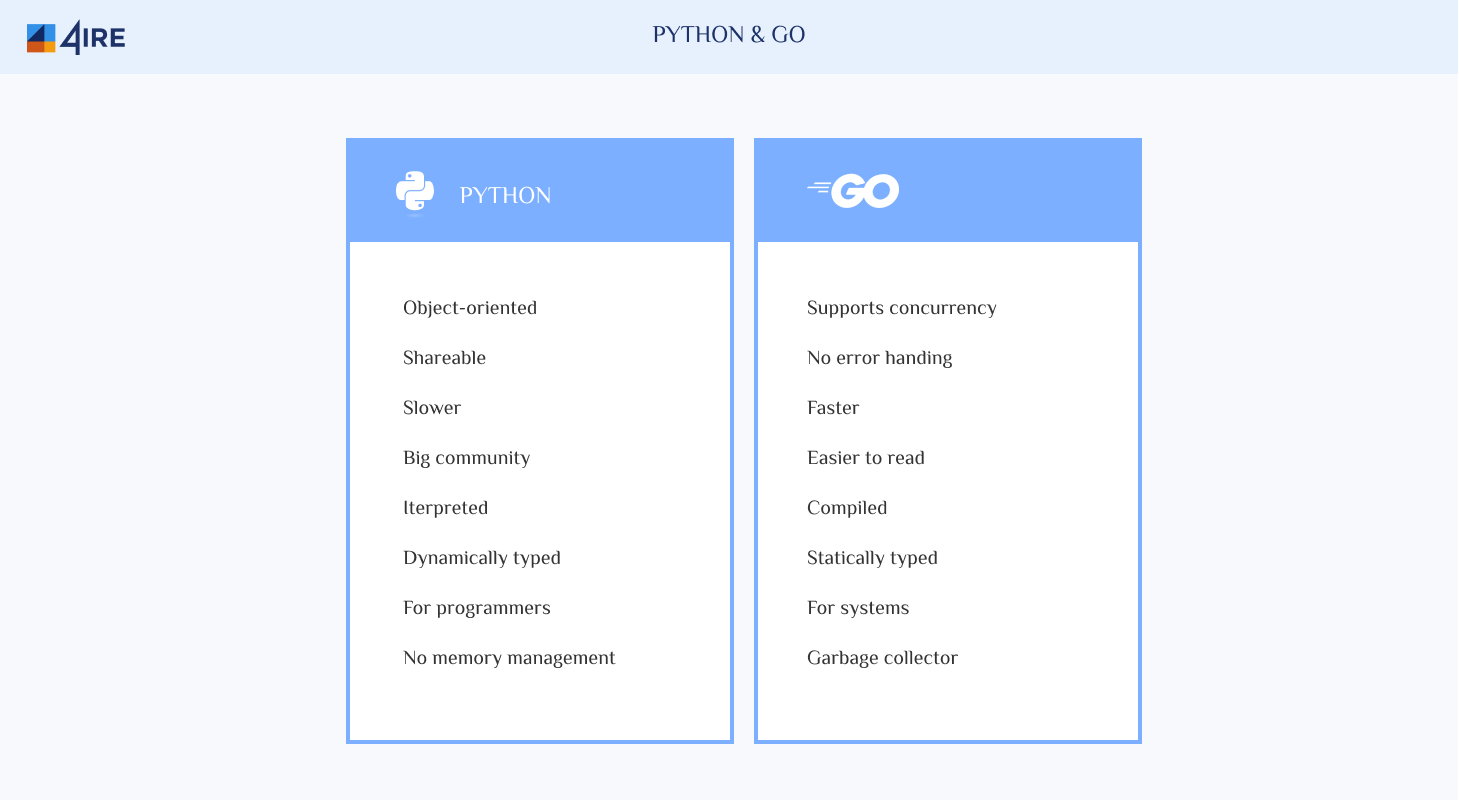 The listed examples are not the only blockchain programming languages available for those willing to work with blockchain. For example, JavaScript has also been widely used to build blockchain systems. This universal interpreted language offers developers dozens of libraries and free resources, making it easy to master for blockchain development. JavaScript allows handling communication between nodes in a blockchain, but it is inferior to C++ in terms of performance. Many developers take advantage of this language because it allows them not to worry about integration. Every web system already uses JavaScript, so developers can focus on the specific blockchain features.

Simplicity may be the best choice if you are searching for a good programming language to develop smart contracts. It is considered the most efficient and convenient language for creating smart contracts and is widely used by professional developers. Unlike JavaScript, Simplicity was designed explicitly for blockchain, so it boasts high reliability and transparency. However, learning this language may be more challenging than C++ or JavaScript because of a smaller community and limited online information.

Rholang is less popular than other programming languages, but it can serve developers working with smart contracts well. Unlike most of the object-oriented programming languages employed in blockchain, it is based on a functional approach. Rholang allows evaluating the application as a series of functions, which helps developers solve them sequentially.

Vyper is one of the recently created programming languages, which originates from Python. This language is often used as an alternative to Solidity and is commonly applied for the Ethereum Virtual Machine (EVM). Due to the features such as modifiers, infinite loops, and recursive calling, Vyper helps address common security issues. Similar to Rholang, it can be used for the creation of smart contracts.

Security benefits delivered by Vyper can also be found in Scilla. This new programming language reduces safety risks by providing practical verifications for smart contracts. By using Scilla, developers can reduce the incidence of error-prone codes. However, Scilla and Vyper may be difficult to master because their community is smaller than those of the top programming languages.

Is blockchain development a popular industry?

Yes, this industry has been developing quickly. An increasing number of businesses and industries use blockchain technology to store data, complete safe transactions, and make their services more reliable and secure. Numerous benefits of blockchain, such as transparency, accountability, trust, etc., make it extremely popular, increasing the demand for skilled blockchain developers.

What languages should I choose for my blockchain?

The answer depends on personal preferences, skills, and goals. If you have skills in JavaScript or C++, it makes sense to use these languages. If you are open to something new and willing to learn, you can master the languages designed for blockchains, such as Simplicity or Solidity.

Can I learn blockchain programming languages quickly if I already have coding skills?

Can I ask for professional help?

If you are not a developer, it’s always a good idea to ask for professional help. A blockchain consulting service will allow you to select the most suitable solution for your business or project. Experts can help you choose the right blockchain, the best programming language, and features that will make your product competitive.

Most well-known NFT marketplaces, like OpenSea or Rarible, have an appealing infrastructure and a universal set of f ...
15 May, 2022
Blockchain 11 min

How Blockchain Transforms the Gaming Industry

Blockchain-based solutions are bringing new experiences to gamers all over the world. Check out how blockchain techn ...
03 Aug, 2020
Blockchain Polkadot 11 min

Polkadot: Technology That Can Boost Your Blockchain Startup

Wondering what is Polkadot? In this article, we discuss how Polkadot works and why it could accelerate decentralized ...
06 Apr, 2021