HomeBlog4IRE Contributed as Developers to Aurora

4IRE Contributed as Developers to Aurora

4IRE, the official integrator of NEAR, is happy to contribute to the development of Aurora, a solution to extend the Ethereum economy, launched in May 2021. Aurora was built on the NEAR Protocol, enabling the latter to function as a layer-2 protocol for Ethereum. Many DeFi and NFT developers anticipated Aurora's release as a solution to ever-rising gas fees, which previously limited new blockchain apps' launch and outreach to broader target audiences.

The major purpose of creating Aurora was to enhance the use of the Ethereum blockchain without urging the users to shift from one blockchain to another one. Unfortunately, even given its multiple benefits for users and developers alike, ETH poses some limitations, including high transaction fees, low throughput, and time per block confirmation (14 seconds in the mean). Thus, Aurora became a robust solution to ETH challenges with its high-performance runtime, seamless token transfers, and cutting-edge decentralized governance.

Aurora was created to operate on top of the NEAR Protocol, using most of its unique features (such as sharding and developer remuneration for gas used in their products). Its two core components (Aurora Engine and Aurora Bridge) simplify the smart contract migration and enable hassle-free token sharing between Ethereum and Aurora ecosystems. Together with 1000-fold lower commissions (as compared to ETH) and greater throughput, Aurora represents a sustainable alternative to Ethereum users.

With Aurora, users can enjoy the powerful combination of NEAR's efficiency without transferring to a new blockchain platform. Developers can launch a broad range of dApps within minutes by linking them effectively with ETH smart contracts and other system elements. Its full compatibility with ETH and operation on a carbon-neutral first-level NEAR blockchain give users unique opportunities and benefits in the integrated blockchain universe.

4IRE is a leading Ukrainian-Swedish IT consulting company that focuses on Defi, FinTech, and Green Finance. Having an extensive background in blockchain development, we at 4IRE see an immense potential behind Aurora in the blockchain sphere. 4IRE engineers are thrilled to become part of the Aurora creation and launch and will be happy to continue contributing to Aurora operation through NEAR Protocol maintenance and integration. 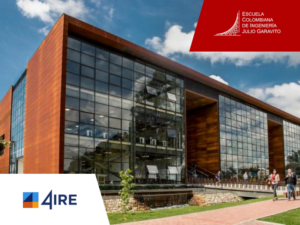 15 June 2021Blockchain, Our news
4IRE is building bridges with the Latin American community

08 June 2021Blockchain, Custom Solutions
What are Crypto Banks? Everything You Need to Know About