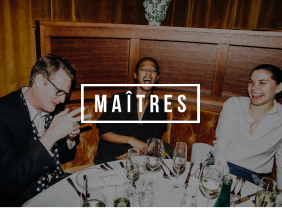 Maitres is one of our Swedish clients, offering a restaurant booking app which allows users to make the reservation and pay right through their smartphones.

Maitres is a Swedish restaurant booking company that wanted to expand its service coverage in 2018 with an innovative, scalable, and user-friendly app. The company’s specialization is an end-to-end restaurant booking and bill payment system allowing restaurants and visitors to connect on an all-in-one digital platform.

4IRE was tasked with creating a mobile ordering app featuring all services of Maitres in a handy, user-friendly format. The project was technically challenging and faced numerous failures of previously hired software developers, so the 4IRE team had to conduct extensive research and development work to ensure that the final product met the client’s specifications.

Maitres previously faced the problem of fake card use in the app, which resulted in financial losses for the restaurants and eroded the app’s reputation. 4IRE team resolved this issue with a cutting-edge fraud detection solution. It helped the company conduct robust card verification and improve the app’s UX, allowing users to book a table and pay a bill in one click.

The 4IRE team worked on the app’s UI customization and intuitive design to let users make reservations, add cards, and pay bills hassle-free. The ease of navigation contributed to good UX and increased the app’s adoption among Swedish users.

The Maitres app was successfully launched in 2020 and attracted $1.5 million in funding from Acast founders. The idea received positive acceptance in the Swedish restaurant industry, with 80+ businesses joining the Maitres ecosystem in 5 Swedish cities to offer end users a convenient booking and payment system. The app’s further improvements were planned together with the 4IRE team, including the API integration with POS systems, geographical coverage expansion to neighboring EU countries, and B2B invoicing functionality integration.


Maîtres Presentation from Maîtres on Vimeo.

Sthlm Fintech Week gathered the best of fintech companies across the Nordics. Check out how 4ire Labs took part in a community-driven Fintech event.
26 Feb, 2020
Fintech

Is DeFi a New FinTech?

Defi is a new way people borrow and lend money, earn on stocks, and conduct their finances in general. Learn more about a major competitor to the old-fashioned FinTech solutions.
23 Oct, 2020
Blockchain

Blockchain is an innovative technology that allows you to manage digital supply chains. Learn more about blockchain use cases for supply chain management in our blog post.
22 Apr, 2021
Learn more