Looking for experts in Blockchain with financial background? 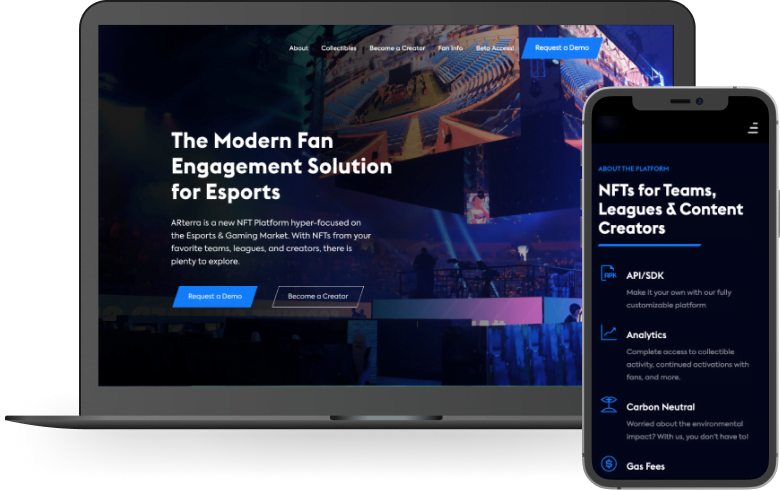 The 4IRE team has extensive expertise with blockchain projects and a proven track record of bringing NEAR-powered projects to life. Here we present a case study of our collaboration with a US-based company ARterra aimed to streamline its blockchain-based NFT marketplace’s launch. The case covers the evolution of our collaboration from project consulting and oversight to NEAR optimization and project redesign from scratch. 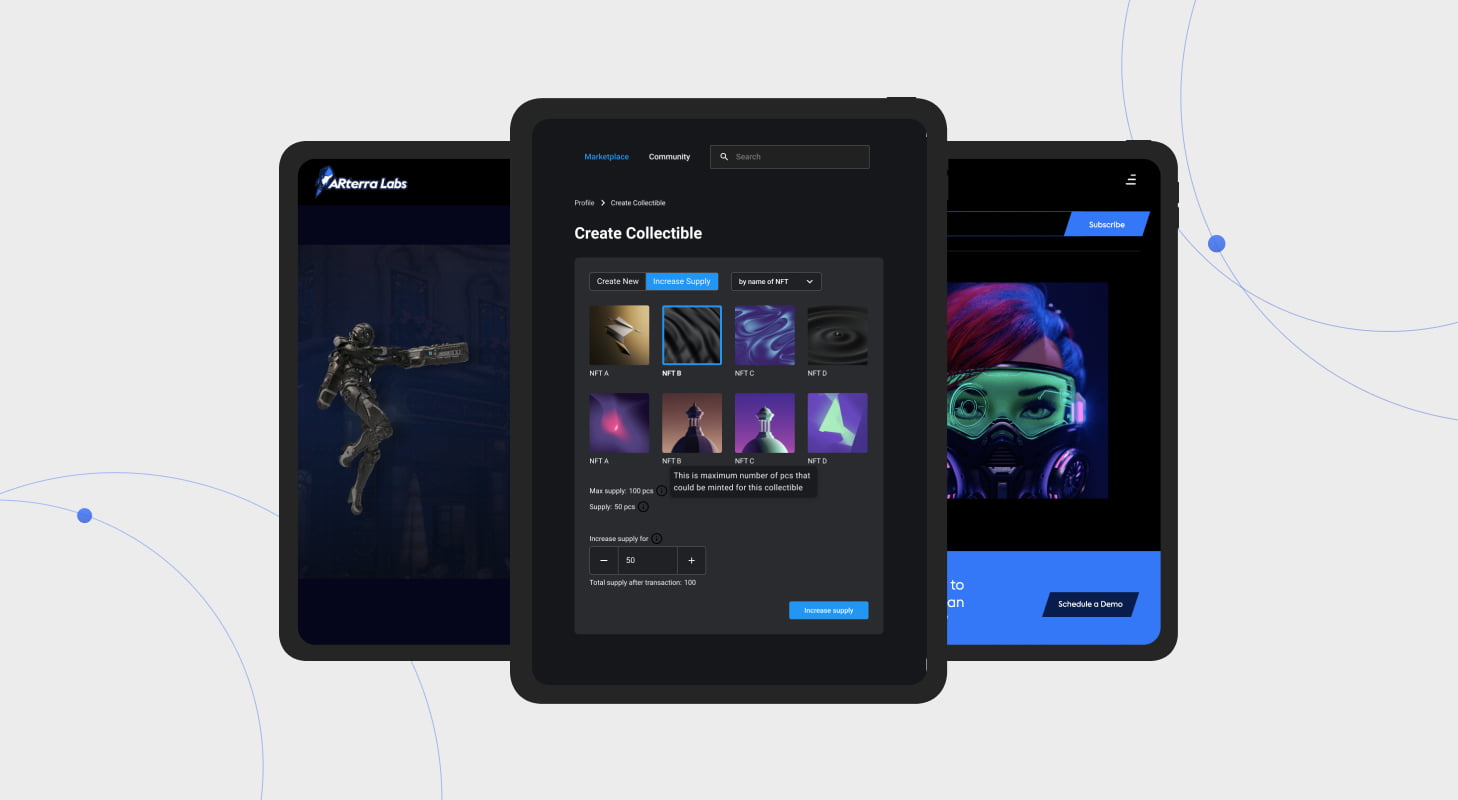 ARterra is a US-based company headed by Bridge Craven (CEO) and Jon Werthen (COO), aimed to serve the fans of sports and esports willing to purchase collectibles and accessories related to their favorite teams and players. They decided to launch a blockchain-based NFT marketplace where users would exchange and trade the collectible esports NFTs.

The company turned to 4IRE for consultation and oversight of the project, the development of which had been previously assigned to another outsourced provider. 4IRE was chosen because of our in-depth NEAR expertise and experience with turnkey blockchain and NFT project development. The team was asked to check the blockchain code developed by the previous contractor and provide further guidance on a smooth NFT marketplace launch. 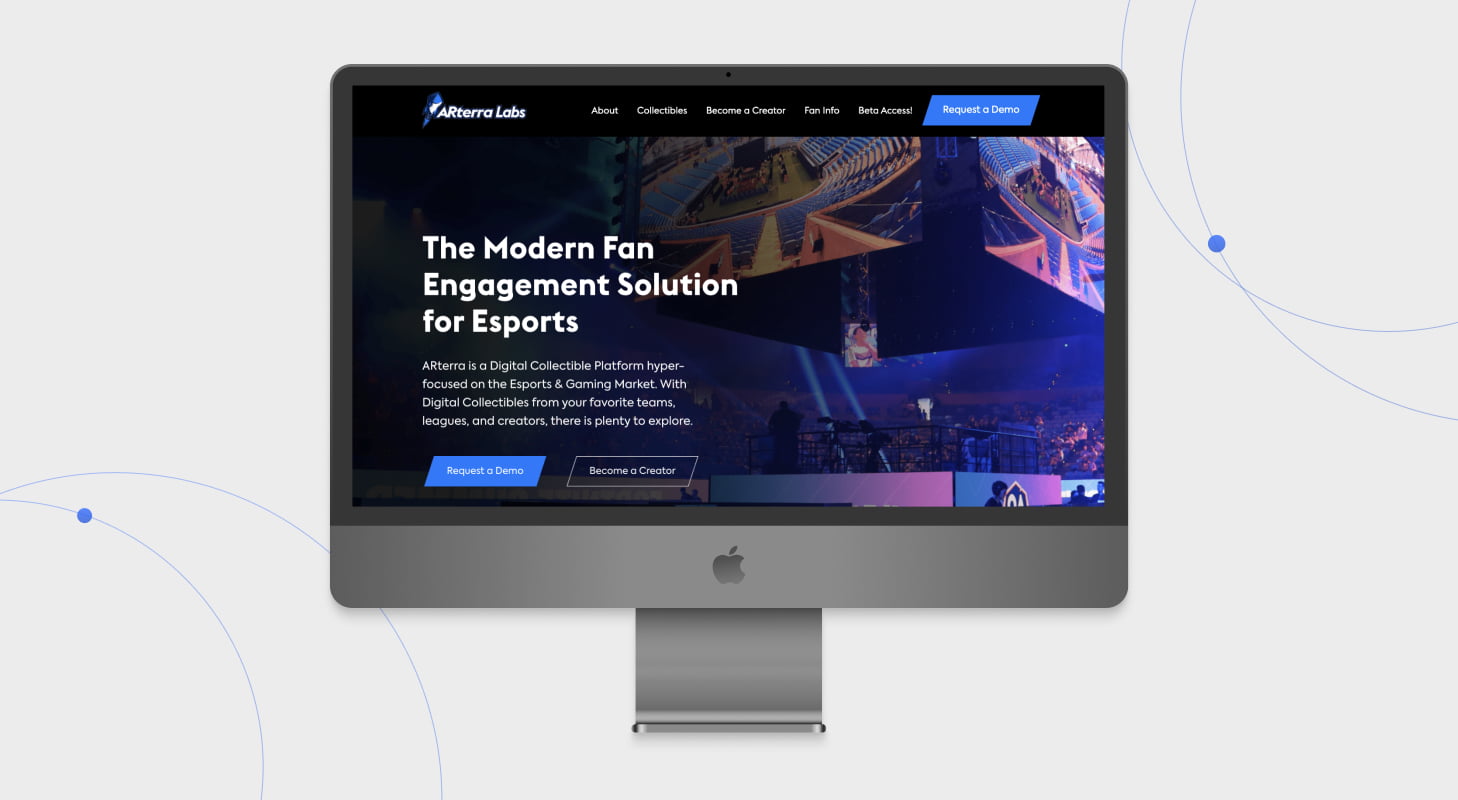 Work on this project lasted from May 2021 and still goes on (the planned completion deadline is November 2021). It is executed by a team of 7 specialists: a Project Manager, 2 front-end developers, 2 back-end developers, 1 blockchain developer, and 1 designer.

Team works by Scrum, divided into two-week sprints. The communication between 4IRE experts and the team of ARterra is held in Slack, with weekly calls scheduled for progress tracking and discussions. The technologies used for front-end development include React, TypeScript, React Router, Redux, and React Saga. Back-end development is conducted based on Node.js, TypeScript, nestJS framework, Bull Queue, and PostgreSQL. The underlying blockchain technologies are the NEAR blockchain and Rust. The DevOps tech stack includes Kubernetes, AWS, Docker, IPFS, Amazon S3, Helm Chart, Terraform, and Ingress. 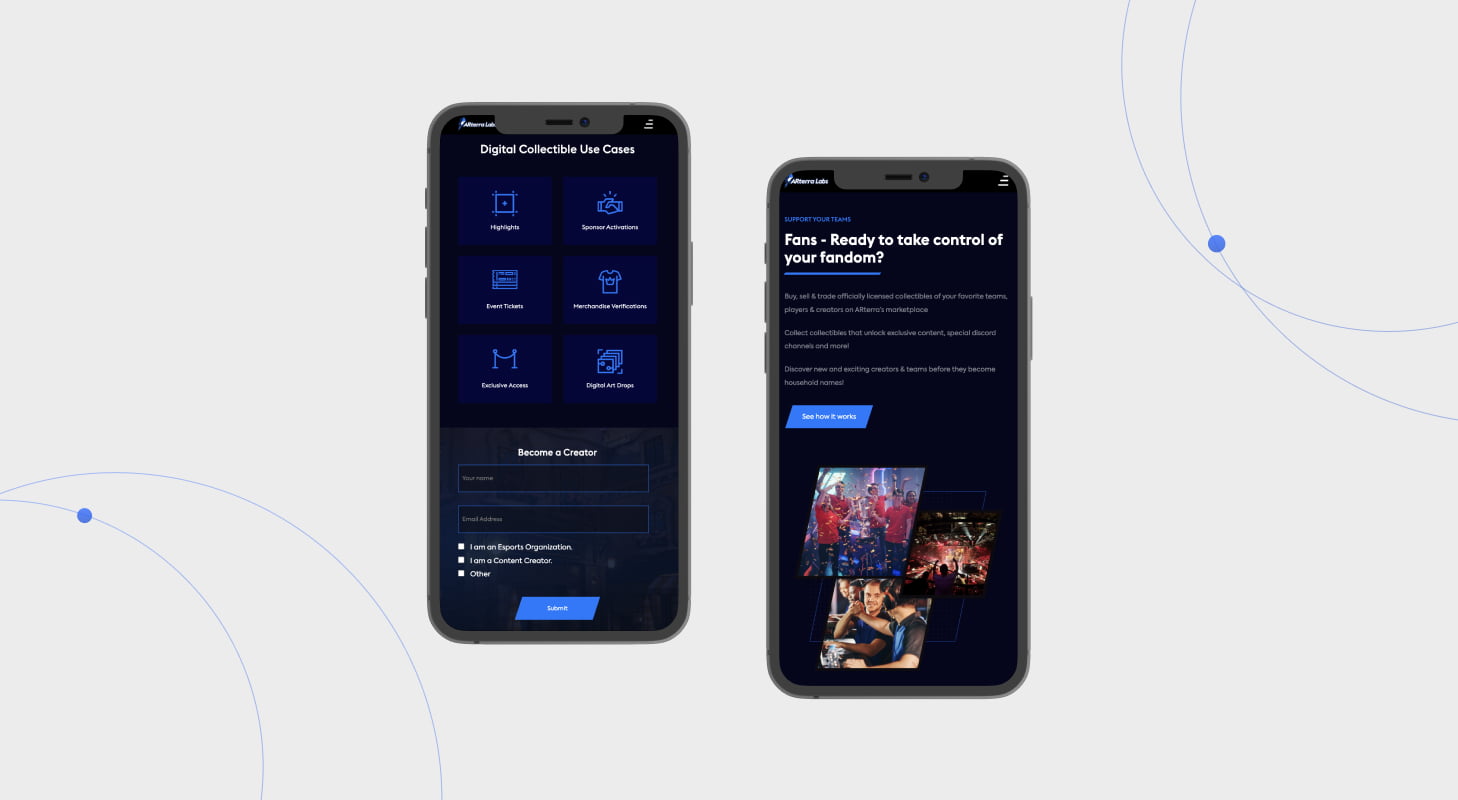 The workload and scope of the 4IRE team’s involvement changed in the course of quality and viability checks for the MVP designed by the former service provider. The first stage involved the platform’s code review and feature audit. 4IRE professionals were tasked to check whether the platform could operate in the real-world conditions and enable users to buy and sell NFTs hassle-free. However, the initial review showed numerous flaws in the produced code and the inability to launch the MVP for testing by real users. Thus, our team’s responsibilities were adjusted.

The first hands-on task for 4IRE coders was to rectify the problems of the MVP’s functionality. As per our initial review, the created platform did not enable smooth transactions with NFTs for the blockchain platform’s users. The problem was aggravated by the fact that the deadline for the MVP release was approaching, and ARterra had a pending commitment to its clients for the timely launch of the NFT marketplace. Thus, our team reworked the MVP with much overtime work to ensure that the MVP, ARterra 1.0, was launched in a working state. Besides, we brought the platform’s code in compliance with the NEAR blockchain working standards to simplify user transactions.

Another problem that surfaced upon the MVP review was the cumbersome, complex web design and UI. The MVP prepared by the Indian contractor was not scalable and had multiple security vulnerabilities. In addition, its design and UX were far from modern standards, so 4IRE developers had to work extensively on the app redesign from scratch in line with secure infrastructure and proper functionality requirements. As a result of this fundamental redesign, the second version of the platform saw the world. It is still in the works, ready for the launch by the end of October 2021. 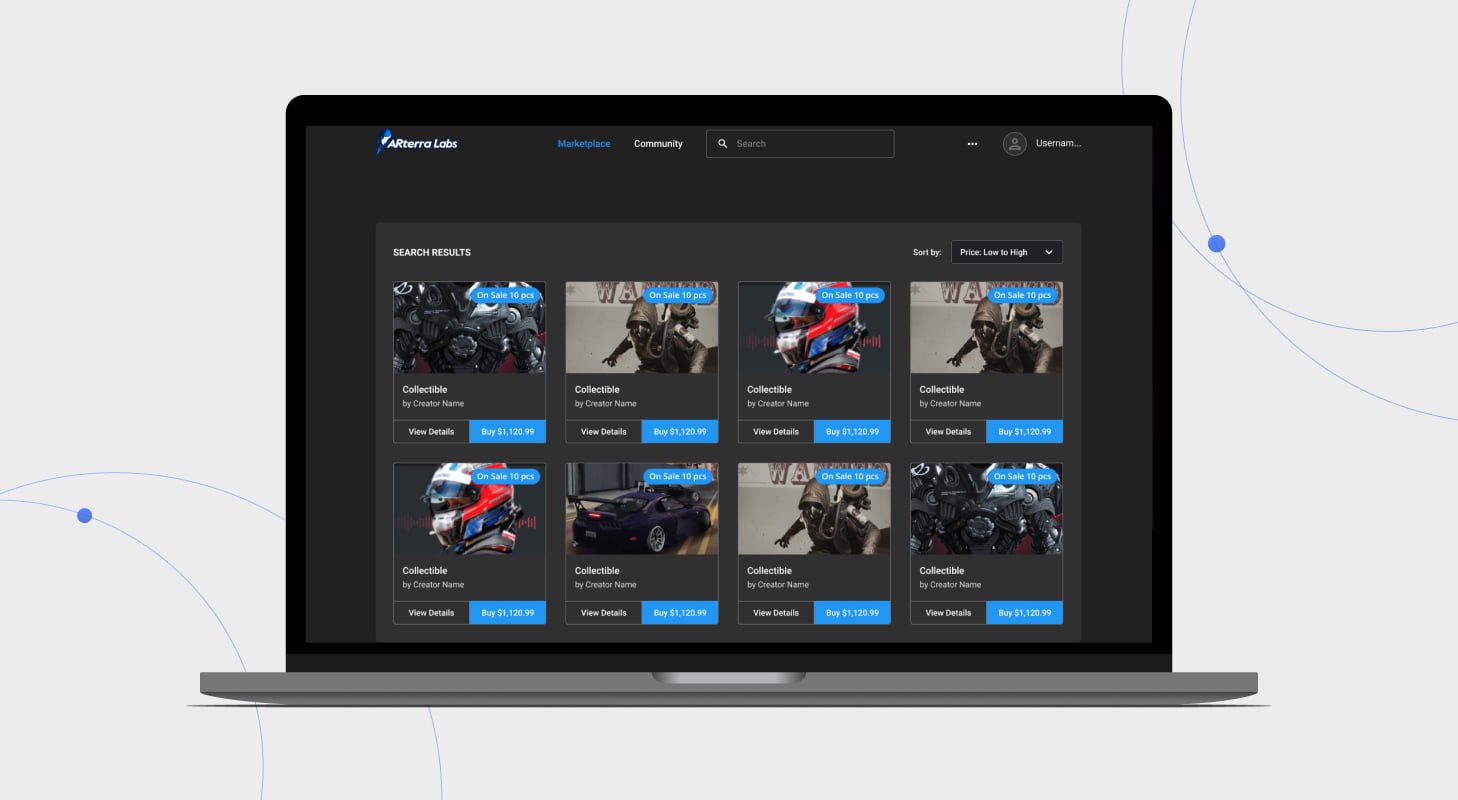 The initial payment preference of ARTerra was PayPal integration. Their primary aim was to guarantee hassle-free, secure transactions for their users. However, given the client’s lack of experience with blockchain projects, this option was renegotiated in favor of using Stripe to power the platform’s transactions. This alternative proved more flexible and better fitted for the NFT marketplace’s specifics. Thus, the 4IRE development team is currently working on Stripe integration into the ARterra 2.0 platform.

Though the project is still ongoing, the 4IRE team is proud of drawing the intermediate conclusions from the successful collaboration with ARterra on the development of the NFT marketplace’s MVP and its further refinement to the ARTerra 2.0 version. To date, what seemed cumbersome and non-functional became a smoothly working NEAR-powered platform at which the users can trade and acquire NFT collectibles associated with e-sports. We’re still working on Stripe integration and fine-tune some blockchain-related features, but the outcome can already be evaluated as a success due to 4IRE developers’ hands-on experience in blockchain development and turnkey NFT marketplace creation. 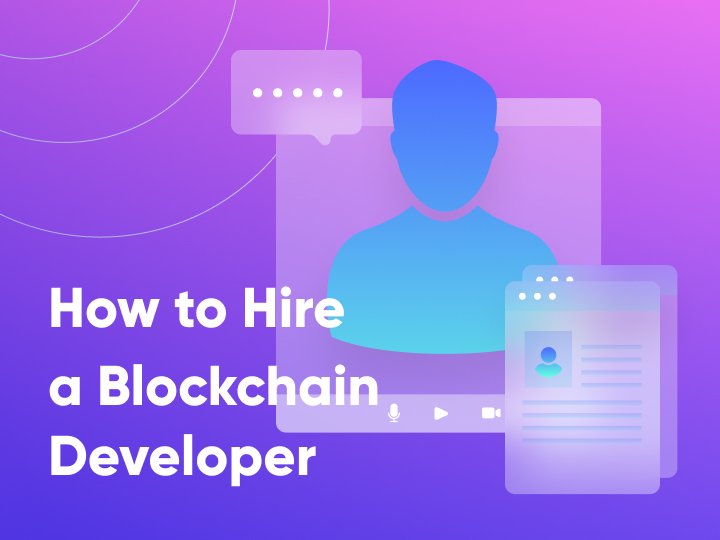 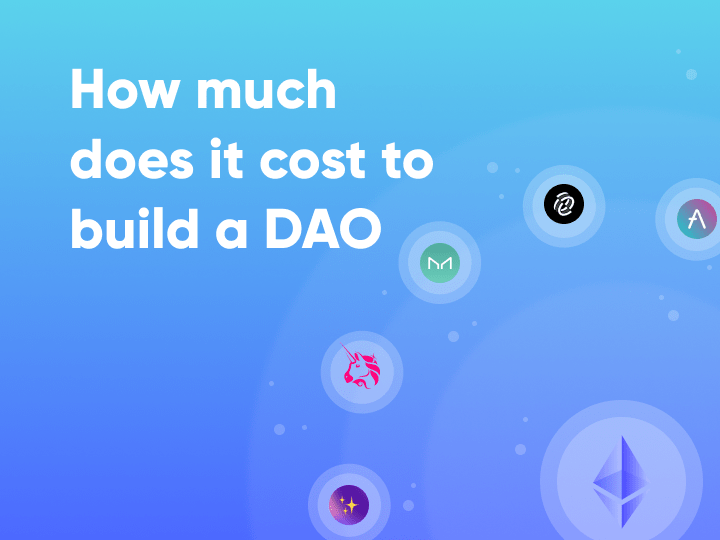